I've hunted for many years, however this was my first experience with an Outfitter. Sierra Blanca was responsive, informative and helpful in getting the hunt arranged. When I showed up the camp was clean, stocked with all drinks, and the food was excellent. Jeremy, my guide promptly picked me up the first morning of the hunt and we were in one of the largest elk herds I've seen within 2 hours. We had some hiking and tracking but did not get into that herd again. Later that afternoon Jeremy and I again went out for the afternoon hunt, within a couple of hours again we were in the the thick of another herd. I shot a small bull that night, Jeremy helped me dress the bull out (I asked to dress him out and Jeremy coached me), we loaded the bull into his truck with their winch (super helpful) and headed home. Jeremy was excited for me as I was. Jeremy was knowledgeable, helpful, answered all of my questions and didn't make me feel dumb for asking so many questions. Peter and his team are great! The guys rallied and helped to hang, skin, and quarter my harvest, an outstanding team! Hunts are expensive, I wanted a great experience, if you're saving up and want the best chance for big game and want to see some beautiful country give Peter, Jeremy and Sierra Blanca consideration. Guys I'd love to come back next year...I'll start saving now!

It was an amazing hunt, the fires and then rain and mudslides made the guides work . There were seven hunters at the lodge, and 5 of us tagged out the first two days. Pete and his guides did a phenomenal job of putting elk in front of us. Pete, I'm coming back for archery elk thanks for everything

They have a good camp. There is a lot of camaraderie. Peter showed me elk every day. I killed my first bull elk and had one of the greatest days of my life. Thanks again to all the good people at Sierra Blanca Outfitters.

We just returned from a great turkey hunt with Sierra Blanca Outfitters. Getting a Merriam and seeing snow on the mountaintops were on the bucket list and we were not disappointed. Peter and Phillip knew where to find the birds, and Peter did a fantastic job of calling the birds into shotgun range. Norma prepared delicious meals and the accommodations were very comfortable. Thank you to everyone at Sierra Blanca Outfitters who made this trip a memorable success. 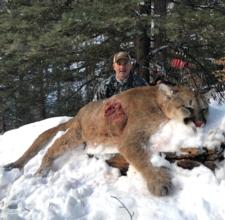 Just leaving New Mexico after a great mountain lion hunt with Sierra Blanca Outfitters. Peter and his guides were top notch! Really enjoyed my hunt and spending a few days in the snow covered mountains. I would recommend the hunt and plan to return in the future.

Peter just wanted to say we had a great time shooting Prairie Dogs and your service and accommodations were 1st class. Really enjoyed the meals that your mom provided for us. We do plan to return.

I had a great time with Sierra Blanca Outfitters. My father-in-law and I went on a 3 day cow elk hunt and both tagged out on the evening of the first day, despite unfavorable weather. Peter is a great guide and the meals and lodging were great as well. This was my first experience with Elk hunting, and it did not disappoint! 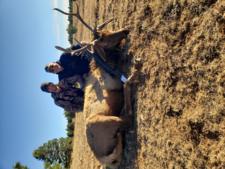 Growing up in Illinois, my father taught me everything there is to know about hunting whitetail deer. So this past November in 2019, I wanted to thank him for the many years and teachings he passed down to me. What better way to do that, than to get him a guided Bull Elk hunt in New Mexico. With tons of different outfitters to find popping up online, it was difficult at first to find an outfitter to decide upon. After all, this would be our first time to ever hunt with an outfitter as well as the first time hunting out of state. With all that being said, there was a lot of “unknown” to us before we were to officially venture off on our trip. After successfully bagging our bull elk on day 2 of 5 however, it was clear that we could not have gone wrong choosing Sierra Blanca Outfitters. Peter and his team were awesome. They were always eager to guide us along the way and were quick to answer the many various questions that two first time Elk hunters might have. More specifically, Phillip was our personal hunting guide who worked alongside Peter and his team of other guides. It was clear that a great amount of teamwork and patience was necessary in order to make the magic of bagging a bull elk happen. After meeting up with Peter and Phillip for the first time, it was clear that Sierra Blanca Outfitters had been doing their research. They made every effort to know where the elk were at all times and would formulate various hunting strategies for our given morning and evening hunts. All of this depended on where the elk were at and how they were behaving of course. If a morning or evening hunt was unsuccessful from not seeing a shooter or getting a shooting opportunity, all was not lost however. Not once did we ever feel like a shooting opportunity would not eventually present itself to us. Also, at the end of each given hunt, it felt like we were somewhat rewarded by heading into a very roomy and comfortable hunting camp where breakfast or dinner were just moments away. Because my father was the one hunting and not myself, maxing out on these delicious family style tacos, breakfast burritos, or ribs etc.… was a definite highlight for me. If you are trying to find or decide on a hunting outfitter for yourself, then look no further. From one hunter to another, I can honestly say Sierra Blanca Outfitters is right for you.

Have been to sierra blanca with two of my friends the last two years. The accomadations are out standing along with hunting. If possible we plan to go here every year.Thanks to sierra blanca outfitters FIRST CLASS OPERATION

Pete and company put on a great hunt for our crew. The food and hospitality were A+.

Went on a cow elk hunt with Peter and crew. Awesome time hunting with these folks. Saw bulls first thing in the morning. Went out in the afternoon and bagged an awesome cow. The facilities were awesome and Peter's mom'd cooking was great. Must have gained a few pounds while I was there. Would definitely go with Peter, Phillip and Victor again.

just went antelope hunting with sierra Blanca outfitters. brought my brother-in-law and his son. Had a great time.The boy shot his first antelope and was all smiles.Phil and Pete always do a great job and take care of us.I have been hunting about 9 years with Pete and have made many lasting memories.

Ted Anderson Thank you Peter I had the hunt of a lifetime! I bagged my bull on the third morning but we seen bulls every day 180 yard shot dropped it he never moved my buddy bagged his on the fifth morning so we went home with 2 6x5s. I’ve hunted elk 5 times before and never got a shot. Phillip Trujillo our guide was excellent. Food is excellent, Peter’s mother excellent cook plenty to eat and snacks to take into field. I give it 5 stars

Ted Anderson Thank you Peter I had the hunt of a lifetime! I bagged my bull on the third morning but we seen bulls every day 180 yard shot dropped it he never moved my buddy bagged his on the fifth morning so we went home with 2 6x5s. I’ve hunted elk 5 times before and never got a shot. Phillip Trujillo our guide was excellent. Food is excellent, Peter’s mother excellent cook plenty to eat and snacks to take into field. I give it 5 stars

After 3 years of hunting and acomidating other hunters the trips have been great. I have been lucky to witness 4 kills ,1 of those my own while witnessing my son n law kill 1 ten minutes later as we doubled up on a bow hunt with Peter as our guide. ??we will be back

I have hunted with Peter Romero for 10 years,killing a bull elk 9 of 10 years, the only reason I didn't kill out one year because I let a lot of younger bulls walk trying to kill the big herd bull The last 3 years I was lucky enough to kill a 6x7 bull each year. The hunting is great, but you have to put in the time. Stalking big bulls takes a lot of patience and boots on the ground.. Would recommend this hunt to everybody.. guides and lodging great

I spent 8 days with Peter and the rest of the Sierra Blanca guides and my only regret is that I wasn't there longer. There is an abundance of game and there facilities and food is top notch. However, the best part of the trip was watching their professional guides work their magic. I have already booked a trip for next year and would recommend anyone that wants to hunt New Mexico to call Peter at Sierra Blanca.

At age 62 this was first Prairie dog shoot of my hunting years. Peter was everything that a outfitter should be at the highest level. Food, lodging and guide knowledge made the hunt a shoot to put at the top of my hunting trips. Bring LOTS OF AMMO and then add more to that, more targets than you have ever shot at! Shooting was so fast and consent my arm and shoulder became painful after two days I finished the shoot using my AR 15. I would advise anyone to book a P-Dog from Peter "It will be the most fun you ever had with your pants on". Thanks Again to Ya Pete ready to book a P-Dog shoot soon. Michael

Had a lion hunt to remember. Was able to harvest two cats. Not a easy hunt but very rewarding. Shot the cats the last day of the hunt, after a lot of miles looking for tracks. Pete and his guides worked hard to the end. Thanks for a hunt of a lifetime. 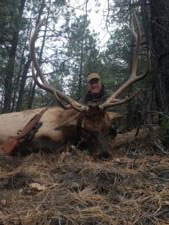 Wow, What a hunt. A little tougher than I thought due to the post rut. But still well worth the trip. Thanks to Ernest my guide for all his hard work in putting up with an old, out of shape man! Thank you Peter for a great time. You mom is one heck of a cook!!!

Send us a Testimonial

To our past clients: We appreciate your comments and if you would, fill out the form with comments and a photo about your experience at Sierra Blanca Outfitters. Fields marked with * are required. Please enter the Name field how you want your name to read on our website (Examples: John Doe, J. Doe, John D., John Doe Corporation).